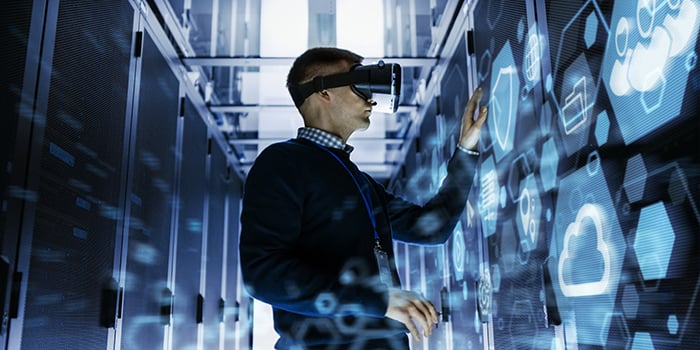 Virtual and Physical MDM in the same box, best of both worlds!

With the introduction of IBM Master Data Management v11, IBM has created a new implementation style combining the strengths of both MDM Physical and Virtual editions. While MDM Physical is more suited to the “centralized” MDM style (system of record), and MDM Virtual is aligned with the “registry” MDM style (system of reference), MDM Hybrid uses a “coexistence” style to provide a mixed system of reference & record. This article will give an overview of the MDM Hybrid implementation style and a couple of interesting lessons learned during a recent InfoTrellis engagement.

MDM Hybrid was first introduced in MDM v11.0 in June 2013 to leverage capabilities of both MDM Virtual and MDM Physical which themselves have grown considerably in capability in recent years. However, MDM Hybrid is still not yet mainstream due to a handful of reasons. One, it does represent a relative increase in complexity and requires practitioners competent in both MDM Virtual and MDM Physical. Two, it can be a difficult migration from an existing MDM Physical or MDM Virtual implementation (although the transition from virtual to hybrid is the easier of the two). Hopefully this article can help alleviate some of those concerns! We at InfoTrellis believe that MDM Hybrid is a strong offering that gives us the capability to have both Virtual MDM and Physical MDM in the same box – the best of both worlds. Additionally, MDM Hybrid is excellent for new MDM implementations, and can be implemented relatively quickly in a basic manner. IBM has also provided a detailed implementation path in its Knowledge Center (see link below).

When describing MDM Hybrid to clients, I have been couching it in terms of a “Virtual Side” and a “Physical Side”, as the product is still mostly segregated.   Between the two “sides” is a fence traversed by a physical MDM service. This MDM service, persistEntity, is one of the workhorses of any MDM Virtual implementation and will be the focus of much of the customization.

Member records (source data) are contained in the MDM Virtual side, processed through the powerful probabilistic matching process that MDM Virtual provides, and assembled into a “golden record” composite view that is then mapped into the MDM Physical schema and “thrown over the fence” to the MDM Physical side using the persistEntity service. The “golden record” is persisted on the physical side. Physical MDM services such as addParty and updateParty are disabled, and modifications to attributes mastered by the MDM Virtual side are not permitted. Other attributes, however, can be modified. For example, name types not in the golden record, privacy preferences, and product or contract data can be modified using standard Physical MDM services.

Special care needs to be taken when implementing the other MDM domains such as contract or product. The persistEntity service could initiate a call to deleteParty if the golden record no longer exists in the system – this could cause issues if there are Contract Roles or Party Product Roles. And how would one establish these in the first place? InfoTrellis recently implemented MDM hybrid with both the party and contract domains at a client, and we came away with some interesting lessons in how to accomplish this.

At our client, a large insurance corporation, we were charged with implementing MDM Hybrid using version 11.3 and using the Contract domain as well as the Party domain with both Persons and Orgs. While we implemented many pieces of the contract domain, this discussion will be simplified to contain the entities and attributes below. 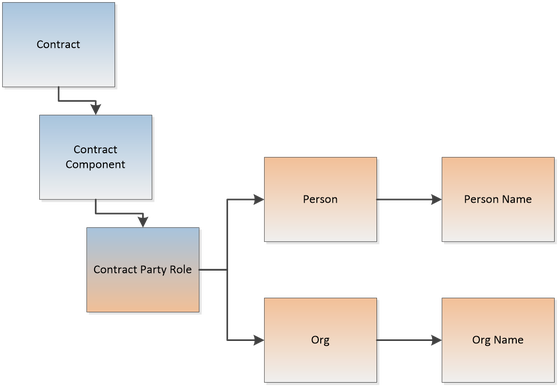 This new MDM solution would be fed by both web services and batch loads (initial and regular delta loads). We decided early on to use the MDM Physical type of services as the entry point for MDM. This was for a couple of reasons. First, I think the MDM Physical schema presents a much simpler and more intuitive structure to consumers (primarily web services). Second, and perhaps more importantly, the Physical MDM schema already had all the contract objects defined.

For those reasons and others, we created a composite service to handle both party and contract data from an external perspective. This maintainContract service handled adding or updating a contract & contract component, and sending the party to the MDM Virtual Side (“Tossing it over the fence”) via memput. When the golden record came back via persistEntity, the contract role was handled via another custom service – maintainContractRole. This required the customization of the PartyMaintenanceActionRule (#211). Since the golden record processing is an asynchronous operation, the service only handled the contract, contract component, and call (or calls) to memput before returning. 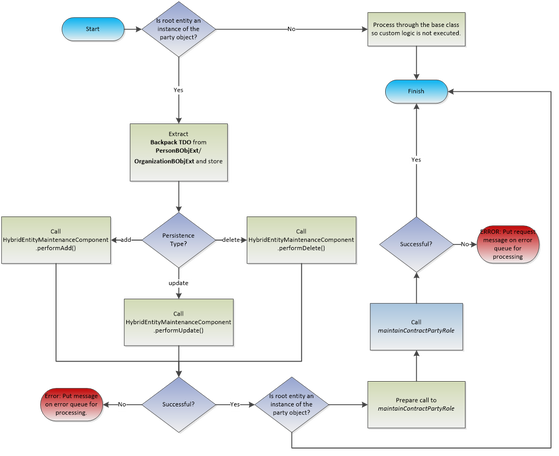 In order to maintain contract role data, we had to create a “backpack” (and I’m sorry for the number of metaphors here – it helped us to explain this process to the client and has stuck in my mind as a method of explanation). This backpack would contain all the data needed to establish a contract role in Physical MDM and would accompany a party as it was processed by Virtual MDM and then get picked up by the persistEntity call on the round trip back into Physical MDM. On the virtual side, this data would not be used for searching or matching. On the Physical side, we had to create a transient data object (TDO) that would be mapped using the graphical data mapper (GDM) included in the workbench. This TDO is the backpack in the metaphor. Also, it needed to be added as an extension object under the TCRMOrganizationBObj & TCRMPersonBObj.

I hope this overview of the MDM Hybrid system has been informative. Unfortunately, as I wrote it, I noticed a number of components that I left out in the interest of giving a (hopefully) better overview of the case study without droning on for 20 pages. These include – handling role locations, customizing deleteParty, modifying the Virtual algorithm, constructing the composite view, and the framework we constructed to interface between Physical and Virtual MDM. We can dive deeper into those topics in a future article.

MDM Hybrid provides a number of exciting new functionalities, and with the flexibility inherent in the IBM MDM product, there remain many unexplored avenues and even ways of doing the same thing. Between MDM Virtual, MDM Physical, and now MDM Hybrid there’s no excuse to avoid creating a Master Data Management solution in your organization. If you’re considering an MDM Hybrid implementation (Or any other IBM MDM solution), give us a call!